Addicted to Engagement and the Ethics of Product Design 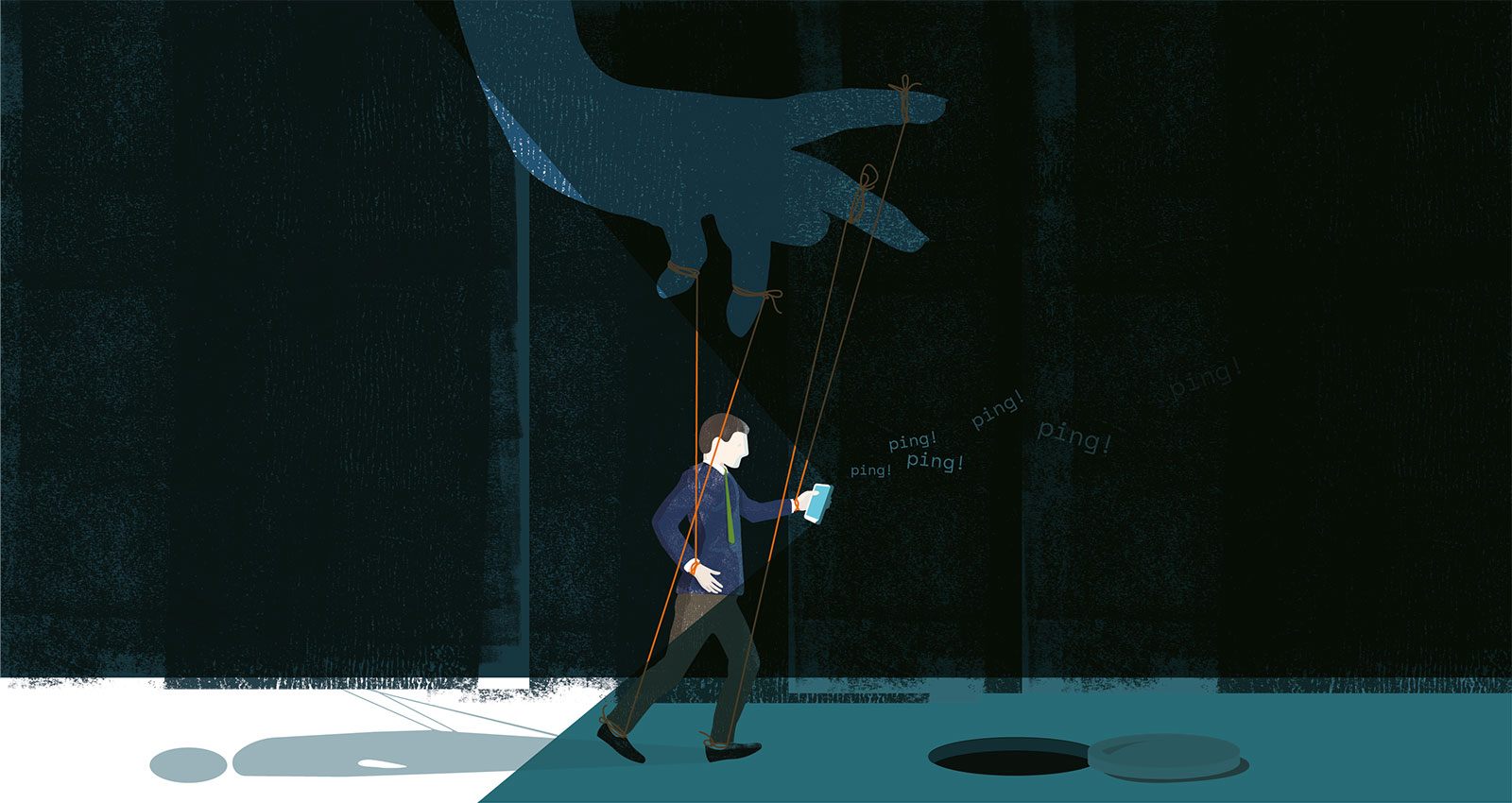 Technology is continuously uncovering ways to alert us to inbound information. Whether it’s a colourful display that glows with a subtle pulse when notifications sit unread… or your smartwatch delivering a little haptic ‘poke’ ensuring you never miss an update – notifications are integrating into our brain’s dopamine cycle.

I recently showed up at my local pool, entering the gallery to wait while my kids enjoyed their weekly swimming lesson. It was a standard Monday evening but I stopped in my tracks to notice a bank of 20 or so parents in an almost choreographed pose. Each with one leg crossed over the other, forearm mounted on their lap holding their smartphone up as they gazed beyond the glass into ‘who knows what’. Instagram I suspect.

It’s a very normal picture that we all participate in one way or another. In a 2016 study, research group DScout reported that ‘heavy users’ touch their smartphones 5,427 times a day. Really. The ironic correlation with drug addiction in the label used to classify this group won’t go unnoticed.

In the 17th Century, the French Philosopher, Pascal wrote: “All of humanity’s problems stem from man’s inability to sit quietly in his room”. It’s a statement that gets quoted pretty frequently in an age of smartphones but it appears that even in 17th-century France, people hated being alone with their thoughts so intensely, they’d do almost anything else: play boules, start the Franco-Spanish war, and whatnot. I’m sure however even Pascal would have been surprised at our antics today. It appears the trend is also contributing to actual bodily harm with recent reports of busy Accident and Emergency wards as a result of 43% of people in the UK admitting to ‘walking into things while glued to their screen’. It gets worse… with apparently 60% of people dropping their phone onto their face while reading. But never fear, like every other first-world problem, there’s an ‘app for that’. The NHS has just launched a product to cut waiting times in half at your Local A&E. It’s ingeniously named ‘Wait-less’.

In a recent article in the Guardian, Tomas Chamorro-Premuzic described the state of the nation when he coined the phrase the ‘Distraction Economy’. Clearly we’re all affected and our ever-decreasing attention is big business.

Google reckons that we spend 4.4 hours of our daily leisure time in front of screens. Chamorro-Premuzic asks… “with second screens, behavioural targeting and the success of Buzzfeed, marketers are at last coming to terms with the attention economy: the battle for monetising ephemeral interests. Facebook and Snapchat may be leading the race, monopolising users for 15 minutes per day, but what are we doing the rest of the time?”

When information is bountiful, attention is limited and precious.

There may well be psychological consequences of the distraction economy. As Nicholas Carr noted in The Shallows: What the internet is doing to our brains, repeated exposure to online media demands a cognitive change from deeper intellectual processing. In other words, we are trading speed for accuracy and prioritising impulsive decision-making over deliberate judgment. “The internet is an interruption system. It seizes our attention only to scramble it”.

MIT Computer Science Professor and author of ‘Deep Work’ Cal Newport points the blame at social media as the root cause. In a recent NY Times article Newport says: “Most social media is best described as a collection of somewhat trivial entertainment services that are currently having a good run. These networks are fun, but you’re deluding yourself if you think that Twitter messages, posts and ‘likes’ are a productive use of your time. If you’re serious about making an impact in the world, power down your smartphone… roll up your sleeves and get to work.”

Calling out Social Media as simply (let’s face it) pretty low level entertainment – might go some way to compartmentalising how we think we spend our time and maybe managing our questionable social media habits.

But whilst we can blame our collective addiction to technology on a pathetic lack of willpower and personal failings, perhaps the software itself should be held in some way accountable. Tristan Harris, a former product philosopher at Google believes we need to take a rain-check on the design decisions being made in product teams hell-bent on engagement by any means necessary. That itch to glance at our phone is a natural reaction to apps and websites designed to get us scrolling as frequently as possible. The attention economy, which showers profits on companies that seize our focus, has kicked off what Harris calls a “race to the bottom of the brain stem.”

In a 2016 essay in The Atlantic, Harris says: “You could say that it’s my responsibility to exert self-control when it comes to digital usage but that’s not acknowledging that there’s a thousand people on the other side of the screen whose job is to break down whatever responsibility I can maintain.”

Whilst celebrated members of the digerati comment on their digital detox experiments, meetups and even conferences are emerging around the same rallying cry. During the ‘The National Day of Unplugging’ organisers ban all clocks and watches as well as ‘w-talk’ (work talk), and ‘WMDs’ (loaded shorthand for wireless mobile devices).

Whilst Harris is part of this movement, he’s more interested in working at the source than participating in conversations about self-control. The Atlantic story describes Harris as the closest thing Silicon Valley has to a conscience. Josh Elman, a Silicon Valley veteran with the VC firm Greylock Partners also believes Harris and his ‘Time Well Spent’ initiative is the first to define the problem in this way… its societal cost and ideas for tackling it. Elman compares the tech industry to Big Tobacco before the link between cigarettes and cancer was established: keen to give customers more of what they want, yet simultaneously inflicting collateral damage on their lives.

Harris along with the founders of a number of bay Area ‘Unicorns’ are alumni of a Stanford University Programme called ‘Persuasive Design’ – led by design evangelist BJ Fogg. Stanford’s persuasive design lab exists to teach the art of persuasion to engineers and product designers with strategies such as the placement of ‘hot triggers’ in the path of motivated users.

Feeling that he might be culpable in pursuing a somewhat ‘dark art’, Harris dropped out to set up Time Well Spent – an advocacy group that hopes to ‘bring moral integrity to software design’ and “… persuade the tech world to help us disengage more easily from its devices.”

Despite his efforts, a niche group of consultants has emerged committed to teaching companies how to make their services ‘irresistible’. One such expert is Nir Eyal, the author of Hooked: How to Build Habit-Forming Products, who has lectured or consulted for firms such as LinkedIn and Instagram. A blog post he wrote touting the value of variable rewards is titled “Want to Hook Your Users? Drive Them Crazy”.

In a damning presentation made at Google before leaving his former employer, Harris stated: “Never before in history have the decisions of a handful of designers (mostly men, white, living in SF, aged 25–35) working at 3 companies”— Google, Apple, and Facebook —“had so much impact on how millions of people around the world spend their attention … We should feel an enormous responsibility to get this right.”

The world of product design and engineering is well versed in user-centered methodologies – practices that have evolved to maximise success by creating products that are inherently ‘human-centred’. Design Thinking is one such approach that we practice at Big Motive. However there’s a fine line it seems between designing products that solve the world’s wicked problems and creating new services that address purely emotional, often previously unknown needs.

Who would have thought that 300 million monthly active Snapchat users desperately need to take augmented selfies, add stickers and create miniature stories of their lives to share with their friends (but mostly strangers)? And let’s not forget how younger audiences are being impacted by technology’s demands for our attention.

It’s comforting that I’m not the only one thinking about this. Smart people will keep building new technology, PHDs will pursue groundbreaking research and companies will continue to solve problems and commercialise the solutions they come up with.

Users, engagement and interaction with both content and technology represent the ultimate metric that defines business success in the new economy. Let’s join the conversation to define the line between solving problems that fulfill needs and contriving experiences designed to distract.

Great teams will continue to innovate as we get better and better at building things right. But the conversation will involve questions that ensure we ‘build the right thing’.

And in this story about attention, if you made it this far… thanks for yours.