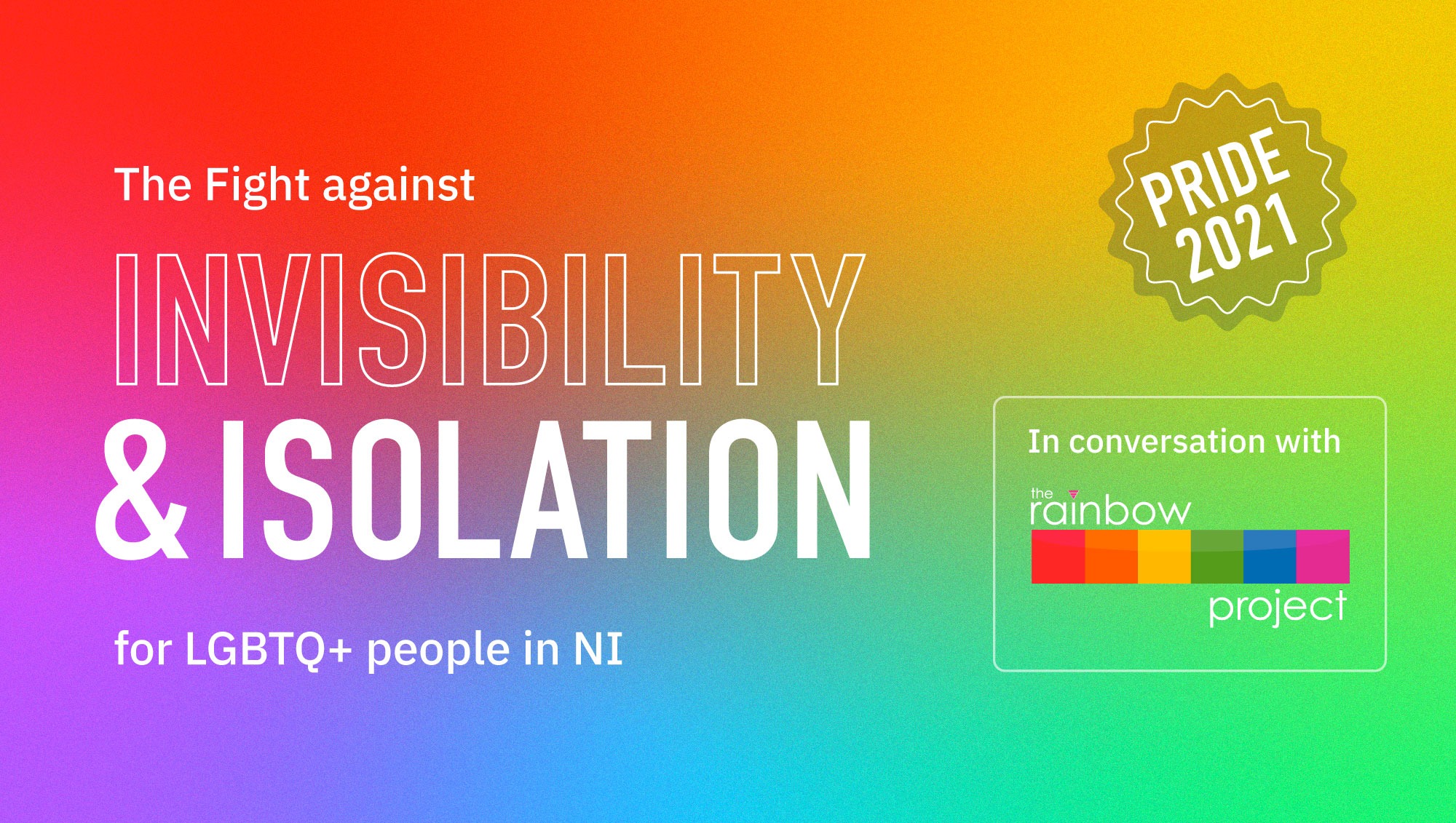 This week marks Belfast Pride week, and 30 years since 100 people marched in the first Belfast Pride in 1991. Society has come a long way in Northern Ireland since then regarding LGBTQ+ acceptance and inclusion. Still, today the reality is that Northern Ireland is entrenched in social conservatism resulting in a lag behind other parts of the UK and Ireland.

To celebrate Belfast Pride this year we sat down with Jayne and John from The Rainbow Project (TRP) – a local not-for-profit that works to improve the physical, mental & emotional health and well-being of LGBTQ+ people in Northern Ireland.

Our conversation reflects on the current experiences of LGBTQ+ people in Northern Ireland and the inspiring work ongoing at TRP.

Two of the biggest issues The Rainbow Project see experienced throughout the LGBTQ+ community are invisibility and isolation. These issues manifest themselves across every aspect of an LGBTQ+ persons life.

An important thing to understand about LGBTQ+ people compared to other communities is they don’t usually come from families where other people share our identities.

Most of us are the only LGBTQ+ person, at least within our immediate families, and often within our wider families as well. We don’t grow up with a family who understands or shares our experiences in the same way other minority communities do.

This is where the feeling of invisibility becomes apparent, a lot of times heightened by the fact that most families never consider the fact that they might have an LGBTQ+ child, the usual assumption is that your kids are straight and cisgender, unless they fit into a regressive stereotype.

Isolation comes into play when we consider that for LGBTQ+ people to be part of a community they have to self seek. They have to go to a gay bar or club, or have the courage to attend Pride. The reality is that LGBTQ+ people don’t grow up in their community, they don’t learn about their rich history and culture and a big barrier to that can be growing up in communities that are actively anti-LGBTQ+. These formative experiences result in discomfort with coming out until later in their lives.

Much of what we respond to here in TRP is experiences during those formative years; and how people internalise and deal with things. Often people experience trauma from this period of their lives.

In Northern Ireland, our government has yet to invest in and publish an LGBTQ+ strategy. TRP reported that work is underway on a strategy but we can only wait to see whether or not something substantive and appropriate will appear in future months.

Since the 1998 signing of the Good Friday Agreement and the forming of the Northern Ireland assembly, they really haven’t passed any pro LGBTQ+ legislation.

This highlights that even at the highest level of society LGBTQ+ people feel invisible.

Invisibility and isolation again present themselves for LGBTQ+ people in NI when accessing essential services, like healthcare. Jayne and John shared stories about lesbian women being denied smear tests because they’re not at risk of cervical cancer, as they don’t have sex with men. To date, there is zero scientific basis to this claim.

John shared his experience of prejudice while accessing healthcare:

I had a very serious throat infection once and went into hospital over Christmas. They carried out 7 HIV tests on me over a matter of 3 days, because they were convinced that with such a serious infection — being a gay man — that I had to have HIV.

One of The Rainbow Project’s biggest campaigning issues at the moment is transgender health care. In Northern Ireland, there’s only one gender identity clinic for transgender and non binary patients, it hasn’t allowed a new patient to join its waiting list since 2018.

For 3 years huge numbers of transgender and non binary people have been unable access the medical support that they need.

A review of the current state of transgender healthcare in Northern Ireland was due in 2019 and has yet to be published.

Northern Ireland schools have no statutory requirement to take any action on LGBTQ+ issues. There are no requirements on the statutory curriculum for LGBTQ+ inclusion. The law requires schools to have anti-bullying policies, but that hasn’t been implemented and the legislation makes no specific mention of homophobic or transphobic bullying.

Schools are the only public authority in Northern Ireland that aren’t accountable under our equality legislation (section 75 of the Northern Ireland Act). Public bodies such as the Road Service are legally obliged to promote equality amongst LGBGTQ+ people, as well as heterosexual and cisgender people, but schools don’t.

Research commissioned by the Department of Education in 2018 found that just under half of LGBTQ+ children don’t feel safe in school, and more than half don’t feel welcome or valued in Northern Irish Schools.

School isn’t somewhere that children choose to be, they are required to be there by law and the least we can expect for LGBTQ+ kids is safety. Sadly, our research has shown that kids are not safe within our schools.

None of that is because we’re LGBTQ+ people, it is because of the homophobia, biphobia and transphobia we experience.

The Rainbow Project works continuously to improve the lives of LGBTQ+ people in Northern Ireland. This includes working directly with LGBTQ+ people to offer counselling, impacting legislation, sexual health testing and promoting education. While the charity alone cannot undertake every single issue that must be addressed until LGBTQ+ are equal members of society, TRP’s work has helped Northern Ireland make significant strides in the right direction. The main areas of focus for the organisation are set out below.

TRP offers counselling on an LGBTQ+ affirmative and co-cultural model. This means all counsellors identify as LGBTQ+ and only work with clients who are either LGBTQ+ or who are questioning their sexual orientation or gender identity. This isn’t because hetereosexual or cisgender people are incapable of working with LGBTQ+ people, it is to create a very unique service in which a person can approach The Rainbow Project  with any particular issue relating to their identity and speak to someone who knows exactly where they are coming from. This creates a sense of ease and prevents any fears of judgement.

If you come to us and say, I’m a gender fluid person, we’re not going to say, ‘What’s that?’ or ‘What does that mean?’  We know what you’re talking about.

TRP facilitates a range of far-reaching support groups. There are groups for all age brackets including children, transgender and non-binary people as well as cisgender LGBTQ+ people. In addition, The Rainbow Project offers support groups for families of LGBTQ+ people, particularly parents who can benefit from a programme called Family Ties. There is also support available for parents who themselves identify as LGBTQ+.

Promoting sexual health is another big priority for TRP, they provide rapid HIV and syphilis testing and work with sexual health clinics to outreach to the LGBT centre and high-risk sex environments. TRP team distributes safer sex material packets including condoms and lube, 200,000 of these are distributed every year.

TRP were heavily involved in the fight for equal marriage in Northern Ireland. Some of the issues they are campaigning for currently include:

The development and availability of PrEP, a drug that is highly effective in preventing HIV, has presented the opportunity for Northern Ireland to significantly reduce, if not eradicate new HIV diagnoses.

The Rainbow Project leads a campaign called ‘Steps to Zero’ with the goal of getting to zero new HIV diagnoses in 2030. The organisation plans to achieve this through a system of support testing and education. Education will be important in ending the stigma against people living with HIV but also in preventing people from contracting it.

TRP completes regular research concerning the lived experiences of LGBTQ+ people in Northern Ireland and most recently, are working on their ‘state of the community’ report. They have also completed research on many different topics relating to the community including:

The Rainbow Project relies on donations to fund their services and campaigns, so one of the best ways anyone can support the organisation is by making a small contribution to their essential work.

At Big Motive, we’re delighted to have made a donation to The Rainbow Project to mark this year’s Pride. Due to COVID-19, TRP hasn’t been able to hold its usual schedule of events which they depend on as a critical source of funding.

You can also support the Rainbow Project by following their social media channels to stay up-to-date with events and campaigns.

Individuals or companies that offer a particular service or skill are also welcome to offer their help to the charity – whether that might be: help with digital marketing or team training, or anything that can help to impart skills. Any work to enable an increase in fund-raising capacity is hugely beneficial to the charity as a whole.

Finally, TRP offers various opportunities for volunteering with their outreach programme – circulating information leaflets and sexual health packets. In addition, The Rainbow Project usually holds multiple fundraising events each year including Strictly Come Dancing and abseiling. Volunteering for events like these can be an effective way to boost fund-raising efforts.

On behalf of the team at Big Motive, we want to say thanks to Jayne and John at The Rainbow Project for taking time to chat with us and give us some invaluable insight into TRP’s work and the lived experience of being LGBGTQ+ in Northern Ireland. We also want to invite our community to support them in any way you can. So please visit www.rainbow-project.org for more information and connect with them on social media.